Five former first-class cricketers were among the seventy-five guests who attended the Jubilee Luncheon of the Stourbridge & District Cricket Society. The event was held at The Fox Inn, Stourton  on 28 September.  Besides celebrating its fiftieth birthday, the Society chose to honour the Headley family, who created history when three generations of the family– George, Ron and Dean each played Test cricket. All three had strong local connections, Ron’s son Dean was born and bred in Stourbridge, while Ron played for Old Hill CC and Ron's dad George played for Dudley CC after retiring from first-class cricket. Dean is now Director of Cricket at Stamford School in Lincolnshire.

Photo-montages of each Headley Test cricketer will be presented as follows: Ron’s to Old Hill CC, Dean’s to Gig Mill Primary School, Stourbridge and George’s to the George Headley Primary School in Kingston, Jamaica. Grandfather George died in 1983. It is anticipated that each A2-size photo-montage will inspire the cricketers of tomorrow.

Cricketing personalities born on 1st April (relevant year in brackets)
Ajit Wadekar (1941) Known as ‘Professor’; Ajit was a stylish left-handed batsman who played 37 Tests for India. He scored 2,117 runs, HS 143, average 31.07. He represented India as a Test player, captain, coach/manager, and the chairman of selectors. He died in 2018.

Stephen Fleming (1973) New Zealand's most successful Test captain, he led the team to 28 victories. He retired in 2007 with a record 7,172 Test runs scored in 111 appearances (subsequently pipped by Daniel Vettori who played one extra Test.

Jofra Archer (1995) Barbadian-born, Sussex and England cricketer who made his Test debut in 2019, and helped them win the Cricket World Cup that same year. He has played a baker’s dozen Tests to date.

Cricketing personalities died on 1st April (relevant year in brackets)
Arthur Wood (1973) was England’s wicket-keeper in the last three home Tests played by England, against Weet Indies, before the Second World War. He made his Test debut in the Oval Test against Australia in 1938. Going in at 770 for 6, he scored 53 and later said: “I’m just the man to bat in a crisis!”

Umer Bin Abdul Rashid (2002) drowned at Concord Falls, Grenada, in an unsuccessful attempt to rescue his brother Burban, aged eighteen, who had been sucked under the water.  Sussex all-rounder. Umer, aged 26, was born in Southampton, raised in Middlesex, and played for Sussex. He played 41 first-class games for Sussex, and was with them in Grenada on a pre-season tournament.

In terms of cricket intertest, the month of November is one of the quietest months of the year – leaving aside this year’s World Cup T20 tournament.

In an attempt to provide, each month, a fresh front page to the S&DCS website, I have resorted to the old stand-by of creating a fantasy team – with a difference. My eleven is composed of a selection of mostly Worcestershire cricketers who either were born or died in the month of November. I confess that I have included two guest players, both of whom were closely associated with the local area.

Beside each name I have added the relevant birth or death date of each individual. To avoid repetition, the month has been omitted. Thus, the note: b. or d. 26/1943 (indicates born or died 26 November 1943).

It appears on paper to be a very strong team, the only obvious weakness being the lack of a seasoned wicket-keeper; the duties would have to be shared between Hughes and Headley.

With the exceptions of Headley and Mushtaq, all others named played for Worcestershire. Hallows only played county cricket for Lancashire, but coached Worcestershire. George Headley played Birmingham League cricket for Dudley. Mushtaq Mohammad also played in the Birmingham League for Old Hill.
​
S&DCS members are invited to submit their fantasy cricket teams – not necessarily by month. The can be all right- or left-handers, Worcestershire-born, dual sportsmen, names beginning with the same letter etc. The choice is yours! 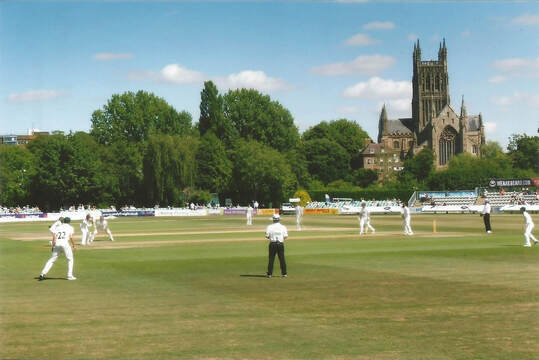 One of the signs of maturing - rather than ageing – can be gauged by the number of one’s peers who have passed away. None of us is immortal. This is especially so of cricketers, many of whom we may remember as heroes of our younger years.

In recent months, the Top Ten of England’s longest-living Test cricketers has suffered some noteworthy losses. Among those recently departed are Ted Dexter, Black Country-born Ian Thomson, and former head of the list, Don Smith, who passed away down under, aged 92.

It was not so long ago that in addition to the trio mentioned, three other notables figured in the Top Ten: Alan Oakman and George Doggart. The list is now headed by the sprightly, Jim Parks, who will celebrate or, depending on the when you read this article, has celebrated his ninetieth birthday on 21 October.
​
Afficionados of cricket already will have noted the common denominator: all six cricketers either came from, played for, or lived in glorious ‘Sussex-by-the Sea’. In the wider world, the most recently departed Test cricketer was John Watkins, who played 15 Tests for South Africa in the 1949-50’s. He was a member of Jack Cheetham’s team of no-hopers which, against all odds, drew 2-2 in Australia. Watkins died aged 98. The title of the world’s oldest cricketer now passes to another Springbok, Ron Draper, who played two Tests against Australia in 1949- 50. Draper was born on Christmas Eve 1926, which, by my reckoning, means that he soon will be 95.

Batting for Australia at that time was Neil Harvey, who is now the only cricketer alive who played Test cricket in the 1940’s. He is a mere spring chicken, who celebrates his 93rd birthday imminently on 8 October. The Top Ten of England’s oldest Test cricketers currently is headed up by Jim Parks followed by Raman Subba Row, Ray Illingworth, Micky Stewart, MJK Smith, Roy Swetman, Doug Padgett, Dick Richardson, Ken Taylor, and Bob Barber.

​However, one unmentioned Test cricketer transcends all others. Eileen Ash (formerly Whelan) played women’s Test cricket seven times, before and after the Second World War. No lady likes to have her age made known to the world, but I do not think she will mind, for on 30 October she will celebrate her 110th birthday! I repeat 110 – she was born three years before the Great War. To mark this auspicious occasion, the Stourbridge & District Cricket Society is sending her a birthday card. When asked why by one of our members, I replied, “because it is what cricket societies do – or should do.”

[The card showed a photograph of a match in progress with the backdrop of Worcester Cathedral . Although Eileen never played at New Road, she did so at Colwall, Ledbury, Malvern and Much Marcle. The photo card was taken and published by S&DCS committee man, Brian Lester, who will have a selection on sale at the Society’s monthly meetings.]
​
Anthony Collis
6 October 2021 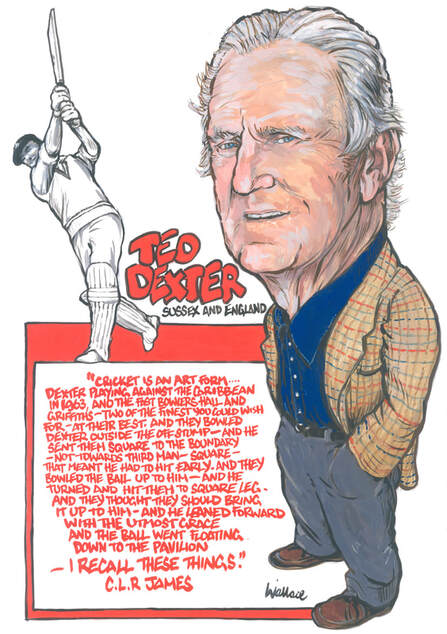 Ted DEXTER died, aged 86, on 25 August 2021 at Compton Hospice, Wolverhampton, close to where he had settled to be near his daughter’s family.

An attacking batsman and useful medium-pace bowler, he played 62 Tests for his country, with his debut occurring against New Zealand in 1958.

Born in Milan in 1935, Edward Ralph Dexter went on to captain England, as well as Sussex, during the early 1960s, and made his final Test appearance 10 years after his debut.
​
Dexter finished his Test career with 4,502 runs at an average of 47.89; he took 66 wickets at an average of 34.93. The highest of his nine Test hundreds was 205 and his best bowling performance was 4 for 10 – both achieved in different Tests against Pakistan.

For Sussex, Lord Ted, as he was fondly known, scored 8,827 runs (av. 40.86) which included 26 centuries, the highest of which was 203 against Kent. His best bowling analysis for the county was seven for 24 against Middlesex.
He stood and lost against James Callaghan in the general election in 1965. He was a qualified pilot who often flew to matches – on one occasion landing at Halfpenny Green airfield before scoring 102 of 173 for seven against Worcestershire at Dudley.

After retiring, Dexter become chairman of England Test selectors, a role he held between 1989 and 1993. He also pioneered the Deloitte Rankings - a method of ranking Test players - in the late 1980s, which went on to be adopted by the International Cricket Council (ICC) and is still in use today as the ICC Player Rankings. Ted Dexter was recently inducted into the ICC Hall of Fame.

​Prior to his evening at Stourbridge, Lord Ted sat (or stood) for the above caricature, which he autographed. Copies were sold in aid of S&DCS funds. He likewise waived his appearance fee, which he donated to his grandson’s rock band! Copies of the individually signed full colour A3 size card, autographed caricatures are available at £10 each, for individual purchaser’s collection, will also be donated to S&DCS funds.
​
Orders must be placed in advance by emailing adcollis@blueyonder.co.uk or phone 01384 442244. Postal deliveries, in a strong tube, can be sent for an additional fee of £3.50.

Cheques to the value of £13.50, payable to Stourbridge & District Cricket Society, should be sent to: S&DCS Dexter Caricature, 34a Chawn Hill, Stourbridge DY9 7JB

It was a proud day for Worcestershire paceman Adam Finch when he made his senior debut for the County.

​The 19-year-old received his cap before the start of play on 10 June 2019 in the Specsavers County Championship match with Lancashire at Blackfinch New Road.

Consequently, the Wordsley-born teenager becomes the latest and, possibly, the youngest entry into a list of more than ninety ‘Black Country-born First-Class Cricketers’. It is planned that each player will be featured in a book to commemorate the jubilee of Stourbridge & District Cricket Society in 2022.

Adam was born at Wordsley in 2000 and was educated at Kingswinford and Old Swinford Hospital 6th Form College.

​A fast-medium right-arm bowler, he first gained international honours with England under 19s against South Africa in 2018 and in the following winter against Bangladesh.

​Locally, Adam has progressed from the thirds to the 1st XI to play Birmingham League cricket for Himley CC.
BLACK COUNTRY BORN FIRST CLASS CRICKETERS
BARONESS RACHAEL HEYHOE FLINT
A commemorative blue plaque (click on image to enlarge) has been installed on the family home of Baroness Rachael Heyhoe Flint.

The plaque honours her achievements both in establishing the game of women’s cricket and her philanthropy in the Wolverhampton community. The plaque was unveiled by the Mayor of Wolverhampton Claire Darke together with Rachael’s son, Ben Flint at a ceremony which took place on 30 August 2019.

“I’m absolutely thrilled to unveil this plaque, all the family are, and it’s a lovely symbol on the house she loved dearly and made so many wonderful achievements during her final 46 years,” said Ben, who has spent the last two years arranging (from his base in Singapore) for the plaque to celebrate his mother’s achievements.

Rachael Heyhoe Flint is one of more than 100 Black Country-born First-class Cricketers to be featured in the forthcoming book to celebrate the Society’s Jubilee. Please use the contact form if you would like to receive further information about the book.