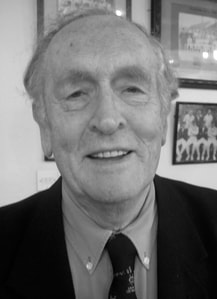 By ‘The Quiet Anglo-Australian’
To borrow, or rework, the title of one of Graham Greene’s best-known books, ‘The Quiet Australian’ might be a suitable epithet for Murray Hedgcock.

However, Murray who died, aged 90, on May 6, 2021, was not just The Quiet Australian: he was ‘The Quiet Anglo-Australian.’
​
He was posted to England where he became the chief correspondent for The Australian, the flagship broadsheet of the Murdoch empire. He liked nothing more than cricket, chiefly the Ashes contests. He lent his support to whichever country he thought needed it most, which invariably meant England.

I first met Murray more than twenty years back at a meeting of the Council of Cricket Societies for which he was publicity officer. We got talking over lunch and when I said was going soon on a trek in aid of Barnados, he whipped out his wallet and handed me a crisp £20 note. I never forgot his kind act to a total stranger, and we kept in touch ever since.

About ten years ago, Murray Hedgcock gave an interesting talk about cricket in Germany. I try to write an account of the talks – mostly about cricket – for my own interest. I asked him afterwards about the spelling of the names he mentioned. He handed over his typed notes, saying he had no further need of them.

I didn’t ever write the report, but Murray’s passing got me thinking and I have decided to retype and issue his talk, verbatim, in a limited number of fifty booklets in his memory.

If you are interested in obtaining a copy of Germans Do Play Cricket by The Quiet Anglo-Australian, the price, subject to confirmation, is likely to be about £5 plus postage.

By the way, Hedgcock is pronounced Hedg-coe.
Please express your interest by using the Contact Us form.

The last player to score 1,000 first-class runs in English cricket before the end of May was Graeme Hick of Worcestershire.
South African David Bedingham might have the best chance anyone since has had of becoming the next man to achieve the feat, which many believe to be impossible in this era of reduced first-class cricket.

David Bedingham was born in 1994 at the coastal town of George, 500km east of Cape Town, close to the start of The Garden Route.

He has played 20 matches to date and has scored 4 hundreds and 3 fifties for Boland, plus 3 centuries and 4 half-centuries for Cape Cobras in South Africa, where his batting has been compared favourably to that of the great Jacques Kallis.

He made his first-class debut for Durham in 2020; despite a top score of 96 plus a fifty, his aggregate of 253 (av. 31) in eight innings, all in the Bob Willis Trophy, he gave little hint of what was to come.

​Bedingham has only 3 matches - against Worcestershire, Derbyshire, and Essex - to achieve the 1,000 runs before the end of May. If he is going to succeed in his task, he is going to need another big ton … dare one say of Hick-like proportions?
Might be worth a flutter!

Not so many years ago the feat only counted if every run was scored in the month of May.

Duke of Edinburgh
H.R.H. the Duke of Edinburgh’s cricketing credentials were impressive. He served two terms as President of the MCC – in 1949-50 and 1974-75. In the final year of his second term, he wrote about the joys of cricket in that year’s Wisden Cricketers’ Almanack.

The first sentence, as intended, caught the reader’s interest: ‘Watching cricket without Wisden is almost as unthinkable as batting without pads.’

The Duke attended Lord’s whenever royal duties permitted and, of course, never missed a visit when H.M. The Queen attended.

He played cricket from the age of eight until about forty-eight and captained his own eleven. Only one complete scorecard is recorded on the CrickInfo website, which must suffice in this instance.

The one-day game was played in 1949 at Dean Court, Bournemouth in aid of the National Playing Fields Association, of which the future Prince Philip also was President. The scores briefly were: The Duke of Edinburgh’s XI 255/9 (N.H. Rogers 93, Duke of Edinburgh 12) beat Hampshire 254/8 declared (H.S. Squires 80, D.C.S. Compton 52) by one wicket.
In that match, the Duke took one wicket that of G.W. Dawson (12) caught by F.R. Brown. He ended with creditable bowling figures of 9-2-25-1. However, he was most proud of a wicket taken in another game in which he bowled Tom Graveney for a royal duck.

The Duke’s closing remark in Wisden 1975 was equally effective: ‘I shall only start to worry [about the future of the game] if cricket ever ceases to be a topic of heated discussion over drinks in pubs and clubs.’
​
Prince Philip, Duke of Edinburgh b. 10 June 1921, Corfu, Greece d. Windsor Castle, 9 April 2021.
[How sad that he missed scoring his personal century by a couple of months.] ​